Our founder, Lawrence Gomez, (known as PAPA L) was born in Gambia and grew up surrounded by the exotic flavours and ingredients inherent to the cuisine of his home country.

Lawrence developed his passion for food when he was just a boy. He loved learning from his Mum, who was also passionate about food, and watching cookery shows. He was amazed at how food could be transformed from raw ingredients into stunning creations. Inspired by his mum’s love for cooking and seeing how something can be created from nothing, he decided as a teenager that he wanted to be a chef. He wanted to develop his own food concept and flavours, creating something that would appeal to all, drawing on inspiration from his African heritage fused with a modern twist.

He started out as a kitchen hand at the iconic Ivy restaurant in London’s Covent Garden, where he spent 10 years training and working his way up to head chef of the private dining room. After the Ivy, he worked at another top London restaurant, Sexy Fish for 18 months. During his time at these top London establishments, Lawrence developed his own marinades, using exotic herbs and spices, and experimented with using them on different foods. His passion for his own food creations grew and grew as he did more cooking for family and friends, so he decided to follow his dreams and launch PAPA L’s KITCHEN. 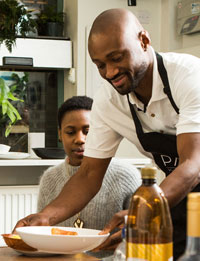 Fresh Out The Oven

For the latest news, plus more details on our availability and the ever-growing menu we provide, please fill out your details here and we’ll add you to the PAPA L’s mailing list!

His professionalism has made the process smooth from end to end and we are excited to be a small charity involved with such a unique experience.

The food was 10/10, the creativity was 10/10, the style and professionalism was 10/10. I would 101% recommended Lawrence - his food talks for itself, there is nothing you have to worry about.

Lawrence had this wonderfully warm charm. He was busily preparing these stunning looking plates within inches of us, so focused on his craft yet so engaged with us at the same time.

Treat yourself with Papa L's Kitchen at Home, bringing the African-fusion food to you! Dismiss